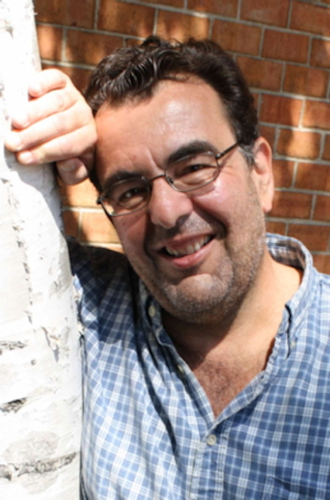 Paul was born on the 29th of October, 1954, in Woonsocket, Rhode Island, United States of America. He is an American science fiction author.

Paul is also a member of the Turkey City Writer’s Workshop. Working along with fellow writer Michael Bishop, Paul has published a series of novels. You can learn more about one of them in Joe’s Liver book review.

These novels were published using a pseudonym, one Philip Lawson. Speculative fiction author Anthony Urias also noted that Paul’s writing had a ‘tradition of the bizarre and the weird’. The novella named A Year in the Linear City was once nominated for a Hugo award. Being that Paul is an accomplished sci-fi writer, we thought that it was about time that we got down to the nitty-gritty of his own books. What exactly are the best books by Paul Di Filippo?

The Steampunk Trilogy is one of his most well-known works. It is comprised of, as the title implies, three works, and they are:

The works, however, weren’t published separately or throughout a period of years but were released in the form of one book – The Steampunk Trilogy. The first book sees the naturalist Cosmo accomplishing something that he’s been attempting for a larger period of time: he has created a hybrid of a human and a newt, named Victoria.

However, Cosmo isn’t incapable of supporting Victoria, so she’s left in a brothel. In the meantime, Queen Victoria – based on whom Victoria, the hybrid, acquired her name – has gone missing. The Prime Minister wants to switch the two so that people don’t panic.

In Hottentots, professor Agassiz and a small group of scientists attempt to find where a certain fetiche is located so as to call upon a set of Lovecraftian beasts. In vein of Lovecraft’s own implicit, even at times explicit, racism, the professor is a bit prejudicial towards black people.

In Walt and Emily, however, a certain pair of poets – Walt Whitman and Emily Dickinson – are on an expedition to the afterlife with an entourage of spiritualists and scientists. It comes as no surprise that all three books are exceedingly funny, bizarre, weird, but altogether unique. The characters and the settings are all finely written. Without a doubt, The Steampunk Trilogy is rightfully on our list of the best Di Filippo novels.

Ribofunk was published in the year of 1996. It is a collection of short stories that awe, amaze, and weird-out readers, all at the same time. It is one of Di Filippo’s best books.

During the latter years of the 1980s, the cyberpunk genre really took off. It concentrated on the frigidness of hardware. However, Ribofunk – as the fusion of ribosome, a term frequently used in cellular biology, and ‘funk’ –, however, focuses on biology as a cutting-edge science.

The so-called Protein Police are a patrol for rebellious gene splicers, partially-human sea-beings living in a certain lake, and the like. Read our review of the best biopunk books if you want to learn more.

The stories are genuinely out there. In the way that writers like Lovecraft and Ligotti can write about the bizarre, Paul can write about his signature Ribofunk with a zest that undermines both the aforementioned authors.

There’s a river that is completely sentient and capable of intelligent thought, a bodyguard that just might partially be a wild animal, an adrenalin junkie that climbs a lofty skyscraper, but then finds himself unable to get off, and plenty, plenty more wacky, odd characters.

The author uses his own trademark slang for writing, the descriptions are scarcely confined to a single word, and his worldbuilding is unmatched. One of the best-rated books by Di Filippo that will have you scratching your head not only at the scientific facets it boasts but also at what the story progresses.

Top 10: Beyond the Farthest Precinct

All the Things “Super”

The Top 10 is actually one of the most famous series penned by the renowned Alan Moore. However, it is the case that Paul wrote one Top 10 sequel, and it is this one. Top 10: Beyond the Farthest Precinct was published in the year of 2006.

For those that are unfamiliar with the intricacies or the general background of the Top 10 books, we have the super-city for superheroes, supervillains, and anyone in-between with unique capabilities and mighty powers.

The city is referred to as Neopolis. Well, the city of Neopolis has police force called Precinct 10. Surely, it is no small feat to even attempt to write a sequel to one of Moore’s most famous books, nay one of the most famous superhero series of all time. However, aided by illustrator Jerry Ordway does it with flying colors.

Neopolis, as is wont to happen in such a city, is under siege from an odd entity: it resembles the fictional grim reaper a lot. The Top 10 goes to investigate, but things, not under their control, make things more confusing.

They see a very bizarre change in leadership. In fact, there’s even a drug becoming prominent on the streets. What’s weird about this drug is that it is meant for robots.

The story is through and through completely different from what Moore frequently wrote. This facet of the book is probably the most endearing and it is what makes the book a wholly Paul creation, barring the illustrations.

Fuzzy Dice was published in 2003. It is one of his most ambitious books, to date, and seeing as we’ve mentioned quite a few bizarre writings of his, that’s saying something. As such, Fuzzy Dice might be the best Paul Di Filippo book, out there, and this one certainly is out there.

A random, regular morning in the life of protagonist Paul is going on when a wholly weird thing occurs. He is visited by Hans, someone who is actually an AI – a dimension-traveling one, in fact. Hans grants Paul the ability to go to whichever world he wants.

Of course, there’s a catch. Seeing as Paul doesn’t know himself that well, the dimension-traveling isn’t quite as straightforward as it was made out to be. Paul goes to a realm where the rulers are hippies, to a video-game world, even to the depths of the Big Bang, and Paul attempts to find the answer to the so-called Ontological Pickle.

Doubtless, everyone has had a point in their lives when the multiverse and its intricacies were a prominent thought. What we surely weren’t subject to was a piece of yo-yo made from a ‘strange matter’ that allows us to trod the infinite plane of existence. Paul, however, is in luck.

Endlessly engaging, entertaining, and humorous, Fuzzy Dice is a hoot and a half. This book is one of the top Paul Di Filippo books, if such a thing is possible.

Changes in the Timeline

Lost Pages is another collection of short stories and one of the best-selling books by Di Filippo. They are, however, all connected in a completely unfound manner. They are all authors from the 20th century. Lost Pages was published in the year of 1998.

All of the authors that are placed in the context of a slightly off-kilter history. They aren’t placed in a different century, year, decade, or anything of the like, but something changes in their respective time. It is actually about as close to alternate history as sci-fi writer Paul can come while remaining his own uniquely bizarre self.

Things get very weird, very fast. We have one of the most famous stories in the bunch of Anne Frank. This time, in the vision of Paul, Anne didn’t die during the Holocaust but saw herself rise to superstardom after her diary was published.

Then, Antoine de Saint-Exupery is amongst the final survivors of the human race after a deathly plague has taken the lives of most of humanity. He now tries to rebuild civilization based upon the power of the air.

Then, we have Joseph Campbell as the editor of Astounding Magazine. Franz Kafka is even a pulp superhero in one of the odd worlds written and imagined by Paul. Other exceptionally endearing works and some of the most popular books by Paul Di Filippo are the following two: Fractal Paisleys and The Emperor of Gondwanaland.