The audience towards whom Yasser’s Play Winning Chess is meant is the complete, absolute beginner. The book begins with tidbits and intriguing, little-known facts about the history of chess, after which Yasser plunges deep into the explanations of how the chessboard works and how the pieces are supposed to move.

There are four principles on which Yasser focuses very much and they present a kind of bedrock for the book, but also for the whole game of chess.

Force: Where Yasser describes the value of each of the pieces, what innate strengths and weaknesses they have, and when a trade of pieces is something worth acknowledging. You can find out more about this perfect book, just take a look at our Play Winning Chess review.

Time: Where Yasser tells the reader the manner by which the mobilization and movement of pieces is efficient and how to stay away from situations where the opponent might be forcing time-wasting tactics.

Space: Where the reader is taught how to evaluate and look out for how much room they have for maneuvering your chess pieces; then, what you should do when you are, in spatial terms, behind or ahead.

Pawn Structure: Where Yasser tells the reader that the chess piece known as a pawn is the most fundamental part of chess and how we ought to use them to dominate and control the board, while evading any implicit weakness.

Present and abundant are annotated games, examples, illustrations, too, and they aid the reader in an appropriate way. There are plenty of quotes in Yasser’s book that speak to the soul, but one that we have taken our time to find and mention here is the following:

‘Young or old, black or white, male or female, jock or couch potato, cook of computer programmer – everyone can learn how to play chess and know the satisfaction of unleashing their creative and combative potential at the chessboard. Chess is in many ways a great equalizer. Having said that, I have to acknowledge that, perplexingly, chess is a great bastion of male chauvinism.‘

All in all, Yasser’s Play Winning Chess is a brilliant book for entering into the game of chess, and a worthy mention for the best chess books for beginners.

Published in 1980, Bruce Pandolfini’s Let’s Play Chess: A Step by Step Guide for New Players is not a well-known book, though its merits regarding teaching chess to beginners mustn’t be understated.

The author introduces and explains to the reader how chess is the most popular and most played board game in the world by far, and rightfully so.

With millions of players from different parts of the globe, and differently aged, the number of players only grows. Bruce sees chess as an elating, exciting battle of wits, where the players are generals directing an army at each other.

The book is a sound introduction for anyone bearing any interest in the game, or even for someone that is familiar with chess, but never bothered with learning what the basics actually are.

Bruce will be the first one to tell you, most of the ideas expressed in this book were thought of when Bruce was teaching beginners in real life, and he incorporated them in here.

With the basics of the game broken down into concise, cohesive statements, the simpler ones going before the ones that are harder to grasp – but, in truth, nothing is difficult to comprehend when reading Bruce’s book.

With a one-of-a-kind format and a pattern of writing that is very easy to follow, readers will find themselves learning in the same manner that Bruce promotes from the onset.

Featuring a rich practice section, too, Let’s Play Chess by Bruce is a gem and very much worth the time to read. That is precisely why we think that it belongs among the best chess books for kids and beginners overall.

Another entry by Bruce Pandolfini finds itself on our list of the best beginner chess books. Beginning Chess: Over 300 Elementary Problems for Players New to the Game is another example of how a proper and adequate beginner chess book is supposed to be written.

The book consists of three different parts. The first part is also the shortest, and it encompasses the plainest and most basic rules of the game of chess and some straightforward tactical attacks – about ten or so useful tactics like pin, skewer, fork, etc. Presented here are also terms that any chess enthusiast must know.

The second part is where the 300 chess problems are presented, grouped into thirty sections of ten tests. The problems all have only a single move answer, adopting what the reader learned in the first part. Unless the reader is a complete natural at playing chess, he will find himself thinking and contemplating various answers and possible solutions. This part teaches the reader not to just go ‘headhunting’ and trying to checkmate their opponent, but to look for the most appropriate advantages at each move.

The final, third part gives the solutions with a short, direct explanation on why that is the only viable one move answer. But Bruce doesn’t just leave the reader with that, he also wrote up some tips on tactics that are helpful, especially for those wanting to have their reading and studying time become all the more productive.

Pandolfini’s Beginning Chess is a strong intro to the most basic parts of the game of chess and, as such, is a must-read. 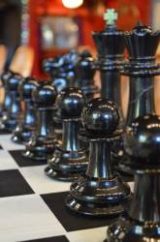 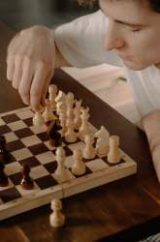 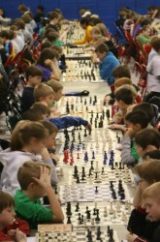 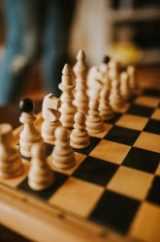 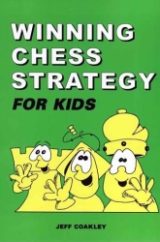