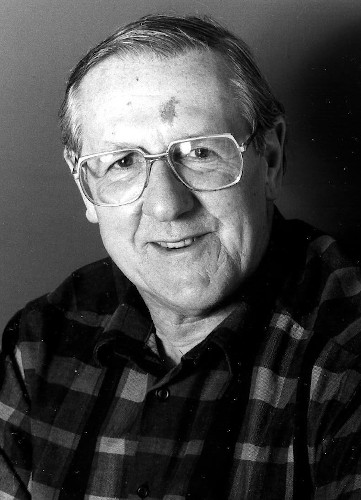 Brian W. Aldiss (1925 – 2017) was an accomplished and versatile writer of the British New Wave, recognized for his works of science fiction. Aldiss spent much of his childhood in preparatory schools which he did not enjoy. However, the resilience he developed made the challenges of fighting in Burma during the Second World War, less grueling compared to what he had grown up with.

After the war he continued to serve in Sumatra, an island of exotic terrain and customs, which influenced much of his writing. His first stories were a collection of fictional sketches about his life as a book seller which became a book called The Brightfount Diaries (1955), launching his writing career. Non-Stop (1958) was his first science-fiction novel, earning him an award from the World Science Fiction Society for most promising new author of the year.

In addition, there are numerous collections of anthologies he had a hand in overseeing and of a plethora of critical essays marked by his articulate intelligence. The short story and one of the best Brian Aldiss books, Supertoys Last All Summer Long (1969), was later used as the base for A.I. Artificial Intelligence (2001) movie directed by Steven Spielberg.

The Helliconia trilogy (1982 – 1985) is an epic series of science fiction and one of the best Brian Aldiss books set on the Earth-like planet Helliconia, considered Aldiss’s longest and most sustained work. It chronicles the rise and fall of a civilization over more than a thousand years, as the planet progresses through seasons that last for centuries.

Aldiss describes a very different world orbiting around a double star, so that years seem much longer, both defining and impacting cultures that rise and fall, with the end result being a story that is original, highly academic, credible and engaging, giving it the accolades as a classic of SF literature.

In the first instalment, Helliconia Spring, Aldiss sets up the world and its transformation which critics believe may represent the transition in the real world from hunting and gathering to agriculture. With protagonist, Yuli, and other secondary characters, Helliconia undergoes violent change as winter yields to spring.

Orbiting above this planet, are astronauts from Earth who study the daily actions of Helliconia and transmit their information back to Earth, where it is used as a kind of entertainment on a specially set up channel called Eductainment.

Finally, in the novel entitled the Helliconia Summer, the Helliconian people and the astronaut observers have a more established relationship, with underlying themes conveyed relating to technological advancement, and the challenging of old knowledge to make way for new wisdom. The final volume, Heliconia Winter, continues to tell a human-scale story in harmony with the larger forces at play — geology, astrophysics, and biology.

Reviewers have criticized this trilogy for outdated concepts of the female characters but this is mostly outweighed by the reviews praising its original blend of fantasy and sci-fi to describe epic journeys, reflected in Aldiss’s award received by the British Science Fiction Association.

Aldiss’s first SF novel was Non-Stop (1958), a classic of the generational ship gone awry theme. The novel starts in an undeveloped tribe, with hints their decayed environment was once more advanced. Some members of the community, including the hero named Roy Complain, challenge the order and beliefs of their people decide to go leave and discover what’s beyond their realm.

Roy’s journey is fraught with dangers and lies as he represents all humans in their quest for a true reality. Aldiss elevates the story with his ability to take advantage of the opportunities which result from the setting. As the ship, representing Earth, hurtles through space clear analogies can be seen in humanities never-ending quest to control the future and subsequently the subjectivity of that desire.

The plot is fast-paced the entire length. There are many powerful, haunting scenarios where we read about lonely ship corridors transformed into wilderness, and showing signs of extreme defeat in battle; infusing the writing with a real visceral style so the reader becomes Complain.

The story covers a lot of topics such as genetic engineering, natural disasters, the spread and evolution of religion, man’s role in society and many others. It is very well-written and recognized mostly because of its vividness and wit. Some parts of the book have additional commentaries that you will definitely enjoy as it reflects author’s brightness.

Aldiss knows how to place human nature under the microscope examining in extreme situations, making the sci-fi much close to reality than a lot of literature in this genre. Despite the heavy themes, it is nonetheless, an engaging read. This classic has stood the test of time well, recognized as one of the best books by Brian Aldiss.

Hothouse (1962) is a collection of five short stories. The story takes place in the far future on Earth, which has stopped spinning. People are chased by dangerous plant monsters that have taken control over the world.

This pace is unrelenting as the predatorily plants constantly hunt the plagued protagonists who run wildly from one life-or-death scenario to another, barely surviving as they go.

They encounter strange creatures like the tummy-belly men and the fish creature carried by a crippled human called the Catch-Carry-Kind, a prophet who knows realizes the critical fact that the sun is in demise thus damning the Earth too. Wise as he is, he is challenged by another character named Morel, a kind of mushroom parasite.

This book takes evolution and turns it inside out; besides the small green humans who are our direct descendants, there are other species of humans who are descended from a strange crossbreeding.

Hothouse has the immersive, disorientating other-worldliness that highlight Aldiss’ strength as a talented world-builder, a lauded fact among fans and critics alike, also supported by the fact he won the 1962 Hugo for Best Short Fiction.

Greybeard (1964) is an elegiac journey into the demise of Earth after a nuclear leak. This underrated book tells a story about Earth after fallout radiation and is set in the early twenty-first century, where humankind is dying, and the main character, Greybeard, (actual name Algernon), barely yet sixty, is one of the youngest men alive.

Greybeard with his wife come to a decision to escape the settlement, get on a boat and search for the Thames River. They meet interesting characters who try to con, entertain and educate them.

As we travel further back in time to Greybeard’s childhood, we discover the true cause of human infertility. With alternating chapters the narrative moves between present and past, showing how the world came to pass. The past is described in dark detail, a depressing deterioration down of society with poverty and disease rampant and alcoholic military and lawmen doing nothing.

While addressing this dark premise, it is written so well and with such great humanity that you will feel rather hopeful about the restorative powers of man.

The novel also refers to Aldiss’s separation from his children. Overall it is a reflection on the human need town conflict with the inability of our species to protect ourselves from our worst tendencies. Aldiss does not have an optimistic attitude towards the future of the human race, but neither is he completely without hope. It is considered an early classic of the apocalyptic SF genre.

Galaxies Like Grains of Sand (1959) raises questions about our collective future based upon our past and present conditions. About our long-term societal and human evolutionary paths, this novel’s essential theme is time.

It is written as nine thematically connected stories about the future: future that spans millennia. This imaginative collection has a strong grasp of historical references, social psychology and politics to cover 40 million years, with each story visiting pivotal moments in that specific timeline.

Some of the stronger stories are Secret of a Mighty City, Out of Reach and All The World’s Tears. On the structural and conceptual level it is a fascinating attempt to organize and contextualize a series of short stories. Galaxies Like Grains of Sand is about the development of humankind across millions of years.

The story contains very interesting topics such as time travel using a speech-like alchemy or machines that are capable of ultimate destruction. The Earth is being slowly destroyed by mankind that is trying to populate and bring together the rest of the universe.

Readers acknowledge it doesn’t always stand the test of time but there is a strong consensus from fans and critics that contains a singular vision and ends strongly. Brian W. Aldiss was an ambitious and gifted writer, with an inventive literary style that blazed a trail in the New Wave era of science fiction literature.