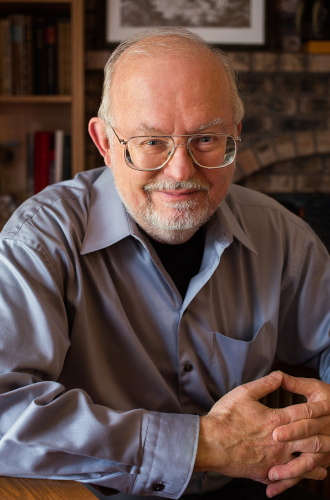 Greg Bear (1951 – ) is one of the world’s leading hard SF authors. Robert Lowndes’s Famous Science Fiction publication bought his first piece, a short story, when he was only fifteen. At present, he works as a writer and illustrator based in the U.S with his family who have collaborated with him on different projects.

He has written over fifty books and received many accolades, including five Nebula awards and two Hugo awards for science fiction. His work contains plot lines around space conflict, pre-fabricated universes, the raising of consciousness and culture, and intense evolutionary timelines, with his most recent work being a series of short fiction collections.

His non-writing career has seen him work within politics and science as well as giving advice to big corporations such as Microsoft, the U.S military and CIA, Homeland Security, and Google as well as being one of the five co-founders of the San Diego Comic-Con.

The Way series (1985 – 1995) is made up of three books set in The Way book series, the name of the fictional universe created by Bear for this trilogy as well as being the setting for an additional short story.

In the first book, Eon, it is 2005 and the U.S and the Soviet Union are on the verge of nuclear war. To make matters worse, a giant asteroid is found moving into Earth’s orbit, and powerful countries each try to claim the object as theirs. The Americans call it the Stone and the Soviets call it the Potato.

Eon book earned Bear an Arthur C. Clarke Award Best Novel nomination. In the second one, Eternity (1988), the world has now been devastated by nuclear war, wars with rapacious aliens, and the infinite tunnel in space-time opening on other universes that needed to be closed. The re-opening of these entrances is reconsidered and decided on, creating a far greater intensity of conflict with many adversaries.

Legacy (1995) is technically the prequel to Eon, the common thread being the main character, Olmy, and the super-spatial corridor of The Way. But whereas the previous stories revolve around space battles and alien civilizations, Legacy (1995), is very much a sea adventure.

When Olmy finds an opening in the Infinite Way that shouldn’t be there, he discovers Lamarckia, an alien planet with an environment that learns from itself to change when necessary. Though some critics rate this series as being difficult to follow with inconsistent narrative tension Bear is applauded by fans for his rich, detailed settings and imaginative plots, regarded as pure hard sci-fi.

The Forge of God Series

The Forge of God series includes two books, the Forge of God (1986) and Anvil of Stars (1992). Set in the 1990s, which to Bear, was the near future at the time, humanity finds itself in a dilemma when two groups of aliens arrive on Earth.

The aliens who invade first put themselves forward as benevolent leaders but the second aliens try and warn the humans that it is smoke and mirrors, that they are deceptive deadly destructors who will annihilate Earth.

The president of the United States is fervently religious and believes the message from the second aliens is God’s final judgment – the forge of God. His solution though, is ineffective, believing that simple prayer will assuage God’s anger.

To offset the President’s attitude of being in denial, the defense department launch all manner of attack strategies to destroy the offending alien spaceships while regular people unite with environmental scientists to save Earth and human civilization.

In Anvil of Stars (1992), humans once again form a relationship with friendly aliens to help them in a quest for vengeance to hunt and destroy a criminal creed and their home planet.

Their search provides the bulk of the story but they do find the evil criminals and vengeance is swift and complete. This is a series where scientific plausibility reigns and the narrative structure keeps you reading with various examples throughout Bear’s work.

In The Forge of God book, the Fermi paradox is examined, assuming that there are no friendly aliens in our galaxies and humanity is better off not seeking out what could potentially be dangerous extraterrestrial relationships.

There is a disgraced anthropologist called, Mitch Rafelson, who raises the alarm after studying the ancient’s corpses of a Neanderthal family. Then there is the startling evidence that humans have DNA with a crucial role in virus behavior as opposed to the discarded status it holds in current scientific knowledge.

Then there is Christopher Dicken, who specialized in epidemiology and works at the National Center of Infectious Diseases. He explores the mysterious virus called Herod’s flu that effects only pregnant women and their unborn children. Eventually, the three scientists find out that Homo sapiens are destined for a great crisis.

Darwin’s Children is regarded as a masterful sequel, with the story told in three sections. In it, Bear speculates upon the social upheaval caused by accelerated evolution, after millions of pregnant women positive for the SHEVA virus gave birth to genetically enhanced children.

State of the Art

Initially considered to be an evolution boon for humanity, the realization slowly dawns on those in power that they will have to die in the process to make way for this new breed of humans. Centered on believable, well-developed characters, this riveting near-future series is applauded for the literate, state-of-the-art SF.

Unknown diseases with evolutionary impact is great story fodder for Bear, who is faithful to credible science about such topics. This is the essence of good speculative fiction providing solid science to back up futuristic predictions and explains why Darwin’s Radio featured in science journals and received a Nebula Award nod.

The Forerunner Saga (2011-2013) is a trilogy based on the Halo series of video games. Halo: Cryptum, the prequel, is set hundreds of thousands of years before the events of the original Halo video game, and explores the lore of the Forerunners, the Flood, and the origin of the Halo rings.

Within the rise of forerunners in the Halo world, there is one Bornstellar Makes Eternal Lasting, a rebellious Manipular, with a passion for lost treasures over becoming a dutiful Builder in Forerunner society. It’s a story about mortality, intergalactic violence and exile.

Halo: Primordian, the opening of the story focuses on the self-destruction of an empire called Forerunner, where Master Builder caught two humans, Chakas and Riser. They are misplaced during a battle and eventually captured in an inverted world. Soon they discover that people cannot escape this world and are trapped in a cycle of horror.

Silentium, the final book in the series and one of the best Greg Bear books, focusses on the discovery of a strange machine run by AI that they call the Forerunner Monitor, discovered by some scientists. Chaka has an intimate connection with when he realizes it stores his memories.

But in the Forerunner empire, chaos rules thanks to the Flood and internal strife within the ecumene. It seems there is no hope until the one known as Ur-Didact and their librarian partner realize they may be able to help.

Reviews classify this series as classic space opera, beautifully crafted with authentic space science throughout. Though the Forerunner culture was described as innovative, critics found the plot confusing, concluding the trilogy was suited only to fans of the Halo series.

The Queen of Angels Series

The Queen of Angels series consists of four books within the Quantum of Logic collection. Nanotechnology is Bear’s theme for this series starting with Queen of Angels (1990) all the way through to the final installment, Slant (1997).

The next Bear’s book is Heads (1990) which main topic is a quantum logic computer and continues with Moving Mars book (1993) focusing on the self-awareness of AIs and its historical development.

Set in late 2047, Queen of Angels is about three protagonists as they work their way through solving a murder mystery. Interwoven with the three different storylines there is a further concept developed relating to AI’s in space.

In Heads, a novella, Bear describes the politics of a lunar culture while exploring some interesting ideas about absolute zero set in a credible religious-political future world. In Moving Mars, we can find out more about political tension between the Earth and colony of Mars that wants to become independent resulting in the final confrontation.

The main character is Casseia Majumdar and her ex-boyfriend, Charles Franklin, that makes a discovery that scares Earth and makes it act. They eventually manage to change geographical location and the direction of Mars. Slant carries on the theme of technologies indelible impact on humanity with the grand future world view that Bear is an expert at.

Rich with provocative scientific speculation, well- drawn characters and powerful prose, the Queen of Angels series is one of the best Greg Bear book series for its sheer ambition. It was nominated or won a Hugo Award for Science Fiction, a Nebula award for Best Novel and the John W. Campbell Memorial and Locus Awards.