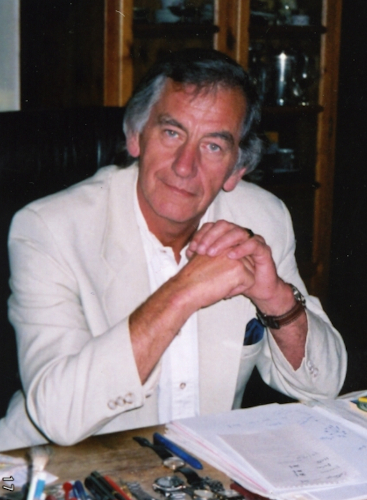 Norman obtained his Ph.D. from Princeton Professionally, and has been an Associate Professor of Philosophy at Queens College, CUNY. John is best known for his epic Gor and Telnarian Histories Series.

The Gor book series is the most famous of which thirty-four books have been written from 1966 to 2019. While the Gor books were extremely popular in the 1970s — even translated into 10 languages — they were out of print by the late 1980s.

Norman felt he was blacklisted by the publishing industry and fans said the books were victims of political correctness, accusing publishers of bowing to the demands of feminists and censors.

Stylistically, authors writing in the SF genre in the 1960’s and 1970’s often wrote on controversial, taboo topics relating to sex with a boundary-pushing attitude, reflecting other, similar movements in society. You can learn more about some of the books of the series in our standalone articles. Check out Mariners of Gor book review.

However, critics also accused Norman of several literary crimes including insufficient editing and blatant repetition of plot ideas, as well as chronic misogynistic content. Despite these criticisms, Norman has enjoyed a revival of interest in his writing and his Gor series recommenced publication in 2001.

Reviews praise the series as a very respectable entry in the sword-and-planet genre and that his actual strength as a writer is his strong world-building abilities. Overall, however, there is a general consensus that it is the first five to seven books that rank as some of the best books by John Norman within the entire Gor series.

The first book of the series, Tarnsman of Gor, introduces readers to Tarl Cabot, the primary protagonist of the series, and explains the nature of the Counter-Earth Gor. The fast pace of the story carries readers along through each scenario in the plot as Tarl deals with high-risk situations and dangerous characters.

It is love that leads Tarl to his greatest challenge, a duel over the love of Talena, with Tarlena’s father who is his greatest enemy. Norman’s plot devices plainly reveal shades of Edgar Rice Burroughs and all in all, it is a great beginning to the series.

In the second book, The Outlaw of Gor, we are brought once again to Gor, this time for good. Carl has come home to Earth and does not leave Earth ever again in the series. This is a story looking back at the recent past as Tarl and readers understand what has been happening for the last few years. The series goes on with plots revolving around Tarl Cabot and various female slaves.

However, several stories in the series are actually written from the viewpoint of a singular female slave, starting with the seventh book, Captive of Gor, followed by the eleventh book, Slave of Gor. In the nineteenth book written from the perspective of a female slave, Kajira of Gor, there are some interesting ideas dealing with Gorean economics and the usage of slave labour in the Gorean textile industry.

Dancer of Gor, the twenty-second book in the series with a female slave’s experience at the fore, stands out due to its exploration of Gorean slavery, work chains and chain gangs, press gangs and the art of slave-dancing.

There is also a secondary male protagonist, introduced in the fourteenth book, Fighting Slave of Gor, called Jason Marshall. Marshall is a he-man college frat boy from Earth who accidentally gets caught in the middle of a surprise slave abduction on Earth, and winds up being transported to Gor as a “silk slave,” or a Gorean free woman’s “boy toy.”

His subsequent adventures are documented in a trilogy within the series including the fifteenth book, Rogue of Gor, and the sixteenth book, Guardsman of Gor. The character of Tarl Cabot returns to reprise his role as the main hero in the Gor world with the seventeenth book, Savages of Gor. Tarl finds himself on a trek in this book, into the wild frontier where Indigenous people live.

Norman enjoys writing stories that use the idea of cultural transplant, in this case, from Earth to Gor. The Indigenous people must battle the white invaders to protect their land, similar to the situation across North America from the seventeenth century. This is in contrast to Norman’s earlier books that are usually set in a society like Ancient Greece or Rome.

So this book sees a divergence in Norman’s world-building. This long-running sword-and-planet series may be considered abhorrent to some SF readers, but the consistency in John Norman’s affirmation of the Gorean status quo, offer the true Norman fan a familiar and fun escape. Take a look at our Rebels of Gor book review, if you are interested in the series!

The Telnarian Histories are a series of space opera novels published between 1991 and 2019 which is considered as one of the best books by John Norman.

Space opera, by its definition, refers to science fiction that, aside from being set in outer space, is typically simplistic and melodramatic in plot and Norman’s writing perfectly suits this category.

There are five novels in total, all of which indicate Norman’s efforts to work more in the SF genre with its galactic empires like Ancient Rome in the stars, though to some critics, the Telnarian Series is regarded as the Gor books revisited in a different context.

In The Chieftain (1991) readers are introduced to the Telnarian world, a vast, corrupt empire that spans galaxies, ruled by dictators and suffered by slaves. A heroic tide led by a peasant warrior named Dog changes everything and he wins freedom as a full-fledged gladiator.

Gladiatorial Dog has his life transformed after an attack on the Empire ship he works on from some mysterious rebels. It’s a simple story and clearly refers to the early Conan the Barbarian series.

In the second volume, The Captain, the hero is a giant called Otto of the Wolfung worlds, seeks to form a space barbarians frontier legion but must first battle errant nobles. This book is followed by The King wherein Otto have to win the loyalty of his space legions via a fight against monsters, aliens, men and murderous slaves.

The pitfalls of absolute rule are further highlighted in The Usurper all about Otto’s rise to power as he struggles with lawlessness and mistrust. The last book is The Emperor, in which the history of the Telnarian world is completed after much upheaval.

Despite the controversy around Norman’s possible misogyny, he has many fans who enjoy the romance and sexual explicitness behind all the inherent conflict of a typical space opera, of which he has a bountiful body of work.