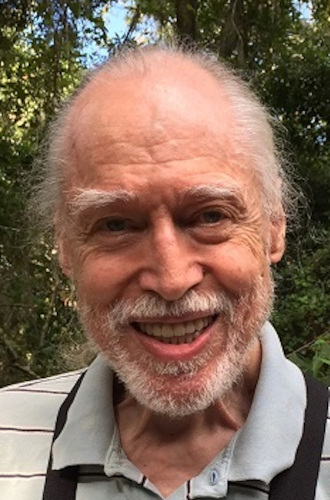 Piers Anthony (1934 – ) is one of the most prolific and popular science fiction and fantasy authors, best known for his New York Times Best Seller Xanth series. Anthony has written several other SF fantasy series as well as volumes in other genres, including historical fiction, martial arts, and horror and an autobiography, entitled Bio of An Ogre; over 200 books published in total.

His writing method involves outlining the background, main characters, and storyline first, to facilitate continuity of each idea. He is also known for ending novels with a lengthy Author’s Note about himself, his life, and his experiences relating to the process of writing the novel and maintains a strong online presence to stay connected with readers.

One of Anthony’s quirky kudos is the fact that he has written a book with titles taking every letter of the alphabet starting at Anthonology and ending with Zombie Lover. Learn more about his book in our standalone articles. Check out our Chaining the Lady book review and Cluster book review.

The novel, Piers Anthony wrote that launched his career, was called A Spell For Chameleon published in 1977. Interestingly enough Anthony saw this a singleton, so only researched and wrote with that in mind.

However, its success precipitated the inspiration to build an entire world that became the Xanth series or The Magic of Xanth, and there are over forty books to date. Other titles include The Source of Magic, Centaur Aisle, Man from Mundania, and Zombie Lover.

The world of Xanth is clearly shaped to reference Florida, taken into a fantastical realm. The chief protagonist, Bink is portrayed as a regular guy, but we learn he’s not at all average.

In this enchanted land magic rules and every citizen has a special spell only they can cast, except Bink, who must find his magic powers or be exiled. An essential reason this is considered one of the best Piers Anthony book series is for the ideas and the structure; these novels are overflowing with a multitude of ideas.

Other positive reviews acknowledge Anthony’s famous sense of humor and how he can weave it between all the drama. Ironically, a common criticism of his work is that there is too much comedy in it, along with some inherent sexism.

Reflection of the Time

Though readers have defended the work as being a reflection of the time, critics have identified long running plot points considered misogynistic throughout the stories. Regardless it is a very popular series earning Anthony film options and inspiring a video game, Companions of Xanth and a board game called Xanth by Mayfair Games.

The Incarnations of Immortality is series consists of eight books mostly published between 1983 and 1990, with the eighth book being published in 2007. The series transports readers into a historical parallel to contemporary fictional reality, but where modern technology help advanced society.

The first book, On A Pale Horse (1983) is considered by fans and SF critics alike as being one of the best books by Piers Anthony, doing what he does best, taking a wide view of the big issues of humanity and applying his imagination to turn it into a creative story. The main protagonist is a photographer called Zane.

This story has a very engaging philosophical quandary to ponder, especially because of confusion of the main protagonist, who wants to commit suicide but at the same time is scared of death.

The twist in their existence is that they can go from mortal life to their roles in these supernatural offices. The offices embody major aspects of human life like death, time and fate.

Like other fantasy series, each book is a self-contained story, but there are distinct story lines that carry between the novels through the exploration and development of several intergenerational characters. The book spawned a five-issue comic series and also inspired a television series, Dead Like Me.

Apprentice Adept Series is another collection of eight stories by Piers Anthony, seven of which revolve around primary stories. The plot tells of both a world of fantasy, and science fiction.

The world of Proton and Phaze exist in the same space but in two different dimensional planes. Proton is desolate planet in a galaxy, predominantly inhabited by humans who love playing The Game, which is a series of physical and intellectual contests that take many forms.

It’s a place of great scientific achievement but the qualities of a medieval society and magic has no function here. Phaze, on the other hand, includes many creatures of the fantasy realm from unicorns to trolls, and magic is the main way the world works, while advanced technology has no place at all.

In the first book of the series, Split Infinity (1987) the main protagonist is a serf named Stile, who lives on Proton but finds he can slip from his modern existence to a fantastical alternative because his altered has died in that dimension. He winds up dealing with all the problems two people have all by himself as well as playing many games as a master Gamesman.

The following books in the series are Blue Adept (1981), Juxtaposition (1982), Out of Phaze (1987), Robot Adept (1988), Unicorn Point (1989) and Phaze Doubt (1990). Readers have given many positive reviews regarding Anthony’s storytelling style which contrasts fantasy and science fiction environments as well as rollicking adventures that appeal to a target demographic of teenage boys.

However, he is also criticized for his antediluvian portrayal of gender relations, being accused of treating topics such as sex slavery and rape with a salacious and cavalier attitude. Fans of the series overlook these faults in favor of the intrigue and world building that Piers Anthony is renowned for.

Based within the Solar System, the first novel introduces us to our protagonist, Hope Hubris and his family. Hope is a strong character who came a long way, he used to be a refugee, but using his will and intelligence, he eventually became the Solar System’s ruler who managed to make peace among the warring powers.

After suffering exile, Hope takes his sister on an eventful journey through space towards Jupiter. Along the way they encounter pirates, who rape and pillage any traveler they come across.

This power abuse propels much of the plot lines and some critics argue that rape, in fact, becomes a key component in the series itself. It is an acknowledged fact amongst fans and critics alike that these books are darker in tone than much of Anthony’s other works due to the shocking violence.

Anthony wrote, in his notes to readers, that he based the storyline off the plight of Vietnamese refugees, a human rights issue that was going on in the late 70s and early 80’s so it is understandable it became his reference point in the theme and stories of the early books of the series.

Aside from the familiar condemnation of sexism within the stories, this series was recognized as a clever weaving of 1980’s geopolitics and pure space opera.

The Mode Series was a quartet of books by Anthony, three of which were written in the early 1990’s, with the fourth being published in 2001. Similar to the Incarnations of Immortality and the Apprentice Adept series, the Mode series is a blend of fantasy and science fiction, a reflection of the writer’s favored style.

Virtual Mode (1991), the first book in the series follows a man called Darius, who travels to earth to take his suicidal teenage girlfriend Colene back to his universe.

At first, she is suspicious about the idea of the existence of other worlds, so Darius tries to prove it using a special artifact that allows them to travel. However, to do so they are forced to use a risky method, which means he has to create a four-dimensional universe.

To navigate a path, Darius uses five points in different universes and a virtual path for the anchors to be tethered to. The five anchors are represented by five people including Darius and Colene.

We can read about other anchors persons in Anthony’s series, where they travel and bring new cosmos into a play. Anthony notes that Colene is a combination of several teen fans who corresponded with Anthony; making her character very popular with female readers.

Negative reviews of the series address the sexual exploitation and the inauthentic characterization of Colene as a depressed teenage girl. Conversely, Anthony received kudos for the originality of the plot and his legions of adolescent fans would consider the Mode series, one of the best books by Piers Anthony.

Piers Anthony’s modus operandi in all his stories is to explore what happens to a person in an unusual situation. With his likable characters and engaging plots, it is no wonder he is one of the bestselling SF fantasy writers of North America. If you are interested in Anthony’s books, take a look at our Kirlian Quest book review or Viscous Circle book review.