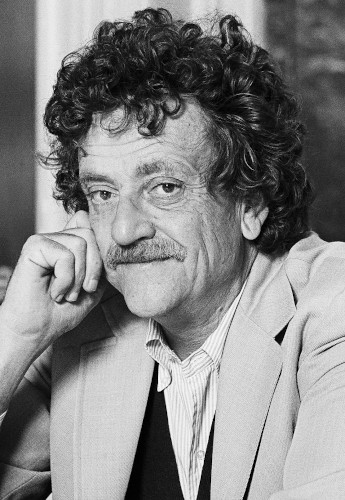 Vonnegut Junior was born on the 11th of November, 1922, in Indianapolis that would become the setting for a large number of his works. He was an American novelist, a satirist, and even dabbled in graphical artistry. Between the years 2001 and 2003, Kurt was acknowledged as the New York State Author.

During his college years, Kurt attended Cornell University. Additionally, Vonnegut was trained as a chemist, worked as a journalist prior to his joining of the United States Army, and served in the Second World War. Post-War, Kurt attended the University of Chicago as a graduate student in anthropology while working as a police reporter.

Soon, he left Chicago and moved to Schenectady, New York where he worked in public relations for General Electric. His unadorned style of writing was attributed to the reporting work he’d done.

Vonnegut was a self-professed humanist, socialist, and a fervent supporter of the American Civil Liberties Union. Vonnegut’s body of work consists of blending black comedy, science fiction, and satire into one. Let’s now take a look at what the best Kurt Vonnegut books are about.

Vonnegut’s first book on our list is no other than Slaughterhouse-Five. The title of one of Kurt Vonnegut’s best novels of all time might suggest something gruesome or eldritch, but it is actually one of the most thought-provoking, stimulating books of the 20th century. The book is made up of science fiction elements, including extraterrestrial life, extra-dimensional time travel, and things of thereabouts.

Its literary merit is only helped by the nonlinear way of telling the story, while we follow Billy Pilgrim through various moments of his life. We see him during the World War, then we see him abducted by aliens – ones that are unbound by time and by space –, and then we see how all of these things affect the grief of man. Truly, a wonderful piece of art.

Kurt deals with many themes in this 275-page novel, and the narrative features a unique outlook and experiment on war. But it is much more than just that. The innovative shape by which the structure of the novel is tangled with the story is peculiar, yet all the more remarkable.

By going back and forth through the life of the protagonist, we learn how the past is, essentially, an irresistible force, one that cannot be overlooked, especially if it’s at the center of a large part of our individual experience as a human being. If it does not sound like the best Vonnegut novel in our Vonnegut book reviews, we do not know what does. It is also one of the best-selling Vonnegut books.

Cat’s Cradle is one of the best novels written by Kurt Vonnegut and one with a remarkable history. Initially, the idea of writing a book with the themes expressed here was given to acclaimed science fiction author H. G. Wells, then to others.

But eventually, it was passed to Kurt, who delivered the first six chapters of the story in a few months, but then the progress of the narrative was stunted. It is worth mentioning that Vonnegut rated his own books and Cat’s Cradle along with Slaughterhouse-Five were the only ones that received A+.

By the time that the book had been written and published, 1963 had rolled around – a full six years before Kurt’s premier best book was published. The story follows mundane, run of the mill writer John.

John bears interest in the peculiar, odd, and generally abnormal progeny of Felix Hoenikker – the fictional inventor of Atomic Bomb. John’s interest takes him to an island in the Caribbean filled with weird people.

Though the story in and of itself isn’t really normal, the progression is singularly natural, not losing anything to rushing. Even plot points unlinked and, at first, unrelated flowed nicely together. An occasional splatter of poems isn’t lacking here, with Vonnegut’s distinct prowess always present.

Deservedly Cat’s Cradle remains to this day one of Kurt Vonnegut’s best books, and, almost universally, his most peculiar one.

Breakfast of Champions or Goodbye Blue Monday is the third entry in our reviews of the top Kurt Vonnegut books. In only his eighth novel published, Kurt dabbles, in the intrinsically ironic and satirical way he is wont to write, with all of life’s facets.

Adult movies are made to seem like any old plumbing, brutality is seen like being intimate, being innocent, or pure is taken as pure, unadulterated evil. The complaints present during the time of writing – but all the more needed to be read during ours – in the United States of America are wheeled out, one by one, with Kurt not holding the least bit.

The racism, sexism, any -ism in general, the selfishness, the destruction of language, is made to seem guffaw worthy, funny, outrageous, hilarious, hateful, and endearing.

Pictures are present on the pages, plain, rough, but seductive in the peculiar way that anything Kurt makes an endeavor in is persuasive. One wishes that the stories of all the characters were fully fleshed out novels by the end.

Kurt’s marked prowess and writing capability made him rise in the genre he has made his own. The novel is as gripping as any work by our favorite writer of satire and one of the most popular books written by Kurt Vonnegut.

Throughout Time and Space

Sirens of Titan might not be one of the most famous Kurt Vonnegut books, but it remains in the hearts of millions of readers throughout the world – or as Kurt would argue, throughout time and space – their favorite. The slapstick, absurdist humor present in any of his works, is the norm all the more here.

The story concerns with the supreme revelation that the purpose of civilization is at the heart of the cosmos. It is as wrong as any premise prior to it. A humorous, absurdist slap across the face is placed by Kurt as he giggles at this thought.

But, even this isn’t quite the point of the book. The true aim is to poke fun and to laugh at what we regard as truly significant in our lives, the things that we take seriously. Be it monetary success, patriotism, beauty, even love or religion.

This is all in line with the way Kurt has always written, as he makes fun and ridicules anything considered sacred – everything and everyone serves as a matter of laughter, but it also makes us ruminate on the notion of why anything would be or has been considered as sacred or paramount.

Kurt knows and hopes that his conscientious readers are aware that the search for meaning isn’t novel, but one to which rituals, ceremonies, stories have been attributed. But even though he acknowledges that it is an inborn trait of humanity to search for meaning, he bears a skeptical air about the things that are imbued with meaning and asks of us to have the same attitude, and when haven’t we listened to Kurt? Make sure to add this gem to your list of Kurt Vonnegut’s must-read novels.

Mother Night represents a riveting recollection and a thorough look at the criminal actions carried out by the Nazis during the course of the Second World War. It is thought-provoking, as all books of Kurt are, and you’ll find yourself questioning your own views on morality and the right and wrong dualism we all hold. If we ranked Vonnegut’s books from best to worst, it would be one of the greatest Kurt Vonnegut books to read. Perhaps even one of the very best books by Vonnegut for many of his fans.

While Kurt is not nearly as known for this novel, it is a worthy contender for being one of his best ever written. A tale of intrigue and moral befuddlement is interspersed through a more straightforward story of empathy, love, and care. Howard W. Campbell Junior, the protagonist of this story, is found sitting in a prison in Israel, a whole fifteen years after the war, preparing for his confession.

His transgressions: his war crimes as a spy during the war. It is not a secret that the readers might find themselves reluctant to form a connection with someone accused of such things, but the perspective and outlook on life engendered by Howard is brooded upon and we learn of his reasons for doing what he did.

Readers oftentimes, almost always, in fact, struggle with the justification of morality that he breathes, in spite of the fact that they want to like him as a character. We see the lines between good and evil blurred, and we are made to look at the Nazi war criminal, at hand, in a new limelight.

We Are What We Pretend to Be

The moral of this novel is, and this quote is regarded as one of Kurt’s most wonderful and acute – We are what we pretend to be, so we must be careful about what we pretend to be. Scarcely is any writer as loved as Kurt is, when taking into account the themes that he writes about. Everyone loves a good comedy, but the black-comedic, absurdist writing of Kurt is what readers stick to. From the list of all Vonnegut books, it is one of Kurt Vonnegut’s novels ranked as the best-selling.

That was Vonnegut’s last book on our list, but make sure to take a look at Player Piano. Especially if you are looking for dystopian novels by Vonnegut, it might be Kurt Vonnegut’s best book to start with.